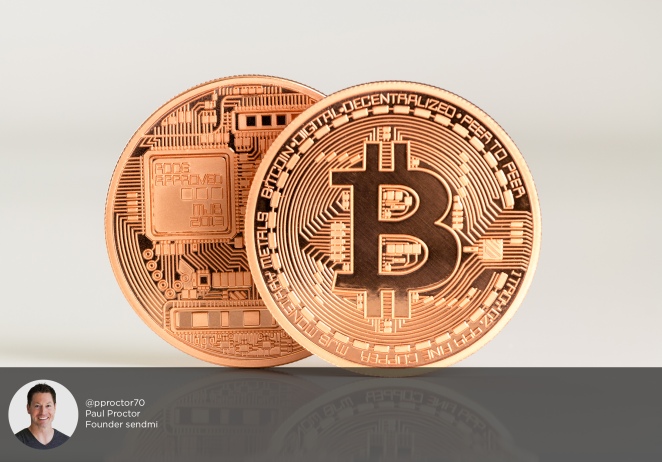 By now, you have probably heard about Bitcoin.  If not, read on, it is high time.  In 2008 a white paper written by Satoshi Nakamoto (a mysterious pseudonym) titled “Bitcoin:  A Peer-to-Peer Electronic Cash System” was published to the internet.  By January 2009 Nakamoto released the first open source version of the cryptocurrency and mined the first block of bitcoin.  (A block refers to a portion of the ledgering system used by Bitcoin.  The word mine is used to define the process by which a computer generates bitcoins on the Bitcoin network and also the process of validating transactions on the network).   Initially this cryptocurrency had a strong following of Libertarians and hackers that saw value in a peer-to-peer cash network that didn’t have a central governing authority.  Also important to the Bitcoin thesis is the idea of private transactions facilitated by the use of private and public keys.  When transacting on the Bitcoin network, your public key is used to verify that the private key used to sign a transaction controls the value to be exchanged.  Other users on the network see that a public key has transacted but don’t have access to information about the actual user identified by the private key.  It is not surprising then that the most publicized stories of Bitcoin in its early years were about drug trade, money laundering, and other illicit use. Since then the most significant economic force in the world, Silicon Valley, has invested more than $2b into companies using the technology and recently the value of a single bitcoin exceeded the value of an an ounce of gold.

Some of the users of the Bitcoin network felt that while the technology had proved valuable it also left much to be desired.  Vitalik Buterin was among this population of users that wanted to build on the Bitcoin thesis.  He created a digital currency called Ethereum. Ethereum utilizes the ledger technology from bitcoin.  This technology is called Blockchain and is probably one of the most innovative systems for the accounting of transactions that exists.  Without getting into the details of Blockchain, the major advantages to the technology is that the Blockchain ledger is virtually unchangeable and gives all users on the network access to independently verify that the transactions written to the ledger are correct.  For a detailed explanation of Blockchain, click here.  In addition to leveraging Blockchain technology, Ethereum also introduces smart contracts via the Ethereum Virtual Machine.  Smart contracts are a compelling look at making and keeping an agreement in our near future.  Conceptually this means that based on agreements made you can put the details of the agreement into the Ethereum Blockchain.  When milestones in the agreement are met, the smart contract would autonomously update, make payments, fulfill or terminate the agreement.  While this idea of a smart contract is very much in its infancy, imagine how convenient and inexpensive such agreements could be.

Dash is the third largest digital currency by market cap.  Dash has taken the Bitcoin technology and claims to have improved it in a few ways.  First, Bitcoin claimed complete privacy and anonymity in transactions.  With improvements in Bitcoin forensics, this claim is not as rock solid as it was originally thought to be.  Dash took the Bitcoin open source software and created Darkcoin.  The name is intended to reflect the improved anonymity of the newly “minted” coin.  This name proved challenging given the history of illegal activity with Bitcoin.  Skeptics thought the name indicated that the purpose of the digital currency was to commit illegal acts.  So, the name Darkcoin was dropped and Dash was adopted.  Dash also created an improved system for verifying transactions.   Bitcoin can take up to an hour to fully verify a transaction.  Dash on the other hand has implemented what they call “masternodes.”  On the Bitcoin network all user’s computers are called nodes.  These computers or nodes, verify transactions by confirming that there are not concurrent transactions for the same coins.  Each node can take around 10 minutes to verify the transaction, and if six nodes verify the transaction it can drive the verification time up to the aforementioned sixty minutes.  Masternodes are simply very powerful computers that serve to speed the transaction verification time.  These masternodes receive payment for their work and as such much more can be required of them.  The payments can pay for upgrades to the masternode hardware so that they can achieve improved transaction verification time.

As you can see above, the overall value of these digital currencies is growing and is not inconsequential.  Bitcoin’s market cap (total bitcoins multiplied by their price per coin) totals over $20b.  In the world of startup, this is what is called market validation.  Or in other words, the value of Bitcoin validates that there is both a need and a market to use the digital currency.  Digital Currencies will play a majority role in changing the way that we make payments in the future.  Understanding digital currencies and their potential to change payment systems gets us out ahead of what is to come.