The $600b Market You Haven’t Heard Of 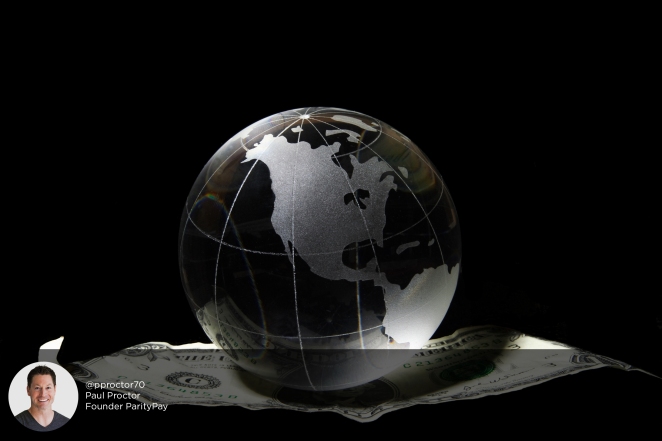 Remittance:  the sending of money to a recipient at a distance.

So, most typically this doesn’t mean crumpling up a dollar bill and throwing it across the room to your friend.  Remittances typically refer to sending money cross border from one country to another.  Given that the worldwide remittance flows are approaching $600b you may have guessed that such transactions happen a lot.  By recent estimates there are 232mm international migrants; or people living in a country other than there country of birth.  If international migrants were a country their population would be larger than the population of Brazil.

Why does this matter?  Well, particularly for those living in the U.S. today, at one time or another almost all of us were international migrants.  Some of our ancestors came to the U.S. as indentured servants, still more came as slaves, and barring Native Americans who got the rawest deal of all, everyone was an international migrant.  We forget that we are a country of international migrants and sometimes our level of sympathy for first generation international migrants is not nearly where it should be.  Surprisingly, about 3 of 5 people that I talk to don’t know what remittances are.  I have a fairly diverse group of friends, but apparently awareness around remittances is deficient.  Why should all of us know what remittances are?  Because if we don’t, we are not aware of one of the most significant lifelines to developing countries that exists in the world today.

In 2012 people living in the U.S. sent $123b dollars to other countries in the form of remittances.  If the amount of remittances sent from the U.S. was a world economy it would be the 61st largest economy in the world among 195 measured countries according to the CIA World Factbook.  Pew Research Center compiled an interactive map of remittance flows, the U.S. flows are shown below: 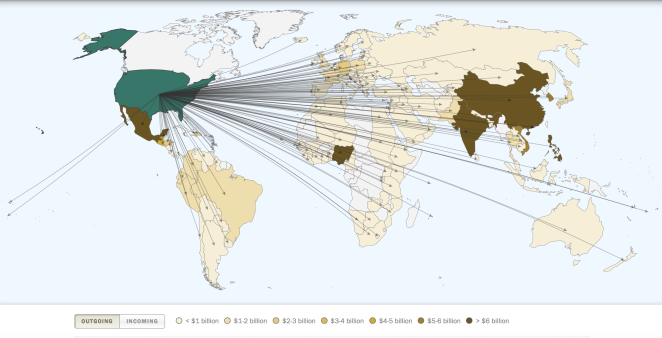 Now that we are aware of remittances.  Are they a good or a bad thing?  Not surprisingly, it depends on who you ask.  Many small minded people take a simple approach, if it means that money is moving out of the U.S. economy to be used elsewhere, it must be a bad thing.  Refer back to the earlier comment about virtually all of our ancestors coming from other places before arriving in the U.S.  Taking a more holistic approach let’s consider the following pros and cons:

Pros and Cons from IZA World of Labor

The Cons listed above really have more to do with use of funds than they have to do with the funds themselves, with the exception of the curtailment of remittances which really means that it would adversely affect those that had developed dependency.  Apart from perceived risk around ill gotten funds i.e. drug money moving cross border, the argument against remittances isn’t terribly robust.

There is a great TED talk by Dilip Ratha (@DilipRatha) wherein he talks about coming from a small Indian town called Sindhekela and were it not for the financial assistance of his aunt he would not have been able to attend college.  When he came to the U.S. for graduate studies he worked doing research and, with what little money he made, he would send some home to his brother and father.  He is now a visiting fellow at Harvard University.  He describes remittances as:

“dollars wrapped with care. Migrants send money home for food, for buying necessities, for building houses, for funding education, for funding healthcare for the elderly, for business investments for friends and family. Migrants send even more money home for special occasions like a surgery or a wedding. And migrants also send money, perhaps far too many times, for unexpected funerals that they cannot attend.”

Remittances account for 42% of the GDP (Gross Domestic Product) of Tajikistan and 35% of the GDP of Somalia.  From 1995 to 2005 the rate of poverty in Nepal dropped from 42% to 31% believed to be due to remittances when 2005 was a peak time in Nepal for financial challenges.  In other words support from foreign family and loved ones did not decrease in tough times rather they were the difference between poverty and subsistence.  Remittances are the developed world’s person to person contribution to providing financial opportunities for the worlds poor.

Ask yourself, if your loved one was in need, would you not step to their aid?  Being empathetic helps us all to seek solutions to the worlds problems.  Remittances from country to country are fairly expensive taking money from the world’s poor that could be used for all of the above described positive reasons.  The average cost to send $200 is 5.9%.  $11.80 of $200 just to move this money from a loving family member to a recipient in need.  Collectively we can come up with cheaper and more efficient ways to facilitate this process and be contributors to buoying up our fellow citizens of the world.